I remember another similar memory from when I was living in Paris and I was a regular at this café close to my school (between me school and my apartment) where many students were working, and all the students working there came from all over the world (including Sweden) which was really cool I think. So during my second year in Paris I went for lunch (or coffee) every Friday for one year once I was off for the day, and me and all the students (well more or less) had got to know each other and we became friends. It was kinda cool having them in my life cus they were a bit like my ”family”, they always asked me about my life at ESMOD, and I in return asked them about their life. They either studied Economics or French (well not the French people obviously =)) and I loved that they lived a different life than me. Sometimes it was a (big) relief to hang out with people that had nothing to do with my studies/life at my fashion school cus I found the students at my school a bit shallow (they were prob just insecure but we had nothing in common anyways so..) so I always updated my friends at the café about my life and what guy I dated at that moment and about the drama that I had in my life at that time of my life.

I seriously loved this café. Well maybe not the café itself (it was a very modern café that had small containers of take away food), but I loved that I knew the people working there, so it felt like a second home to me. I remember having a huge crush on this French guy named David (a black guy who was really handsome that only black guys can be=)) and he worked there and I always blushed when I saw him working behind the desk. Sometimes I made sure that I went there after lunch (on Fridays) around 3 pm when I knew they were gonna be on their break so I could sit there and hopefully be able to chat with him. The thing was that I was really shy and his English was not the best (he could understand English but he didn’t really speak English that well) which made it quite hard for us to communicate with each other. That made me very insecure and frustrated. I mean, it´s s much more fun if it´s easy talking to people no matter what language u speak. Altho I´ve always enjoyed just sitting and listening to people talking which I did here as well (I mostly sat there listening to them talking and laughing when they were on their break). I don´t know what they thought of me, they obviously liked me since they seemed to enjoy my company (since the conversations were in French most of the time I didn’t say very much) so I don´t really know whether or not they found me boring or if they really liked my company, or maybe they didn´t think about it at all…who knows… whenever this David guy was there I never knew what to say, it was as if I was drawing a blank and all of my words and thoughts disappeared into nothing. I wanted to say like a million different things but since we had a language barrier thing going on I was so insecure I didn’t know how to get my words out so they would sound smart and interesting.

David and a close friend of his who also worked at the cafe they tried to talk to me but I always blushed and never knew how to respond. I was probably analyzing myself waaay too much (probably all for nothing) and what I was gonna say and how it it would sound etc. Or maybe it was because the conversations were in French that made me nervous, if it would have been in English I would have kicked some serious *ss and talk for hours and hours and I would have charmed him, but sadly enough that was not the case.. But despite my shyness around this David I really liked having this crush on him. I had fun being at the café when he wasn’t there as well, but it did give me an extra touch of excitement everytime he was there.

I was only 23 years old back then so of course I had no clue of who I was, but on the other hand I didn’t really analyze him and his moved which made it all very casual and fun.  I find it very exciting having crushed on guys (altho it does depend on how u handle it and how it ends..) but omg did I love this period in my life where everything (except for school) was really good and fun. I was also quite proud of myself that I had these people in my life, not that I had accomplished anything, but it was just more the feeling of knowing these people at the café that gave me this huge satisfaction. Every time I went to the café I always wondered whether or not this David would be there, and the thought of him being there gave me butterflies in my stomach and I always made sure that I looked my best before going there for my lunch/coffee (in case he would be there). He never asked me out tho which I found a bit strange but I didn’t think too much about it (altho it was always in the back of my head) so I always wondered if I should ask him out. We did exchange numbers at one time but nothing really happened except when he texted me late at night in the week end (I like my sleep too much so I didn’t answer) so after a while I understood that he wasn’t looking for anything serious (buhuuu, but it was fine cus I hadn´t developed any deep feelings for him thank god ). But the funny thing was that a couple of months later I was talking to a Swedish friend of mine who also worked at the café (and who also hung out with this David guy), and we ended up talking about him and I think I mentioned in one way or the other that I had a crush on him, and that´s when she said that this other girl Helena (also a Swedish girl working there) also had a huge crush on him and he liked her. I just smiled and said nothing more about it. So it turned out that he had been playing with the both of us all along haha. C´best la vie as the French people would say (that´s life). I was surprised tho to hear this but I didn’t really care, so that probably showed how deep my feelings were for him…But I sure enjoyed our so called fling and I def had fun having coffee with him while trying to come up interesting things to say to him. I def enjoyed my time at Cojean, and I was one fling wiser=).

These picture are from Paris but many years later tho (so October 2014) when I went there with my sisters for a long week end. Paris is a very special city, a very beautiful one with many restaurants and cafés that would take u forever and ever to go through them all. The ambiance there is a bit different form the one in Sweden. I don´t know of if it´s because they are more social than us and because they actually like talking to strangers, but there´s something special about the ambiance there. Doing people watching is also something I love doing, especially at cafés in Paris, there is so many people walking by with so many interesting outfits (whether they are fancy and elegant or more grunge and metal looking people) that u could sit there all day long everyone passing by. 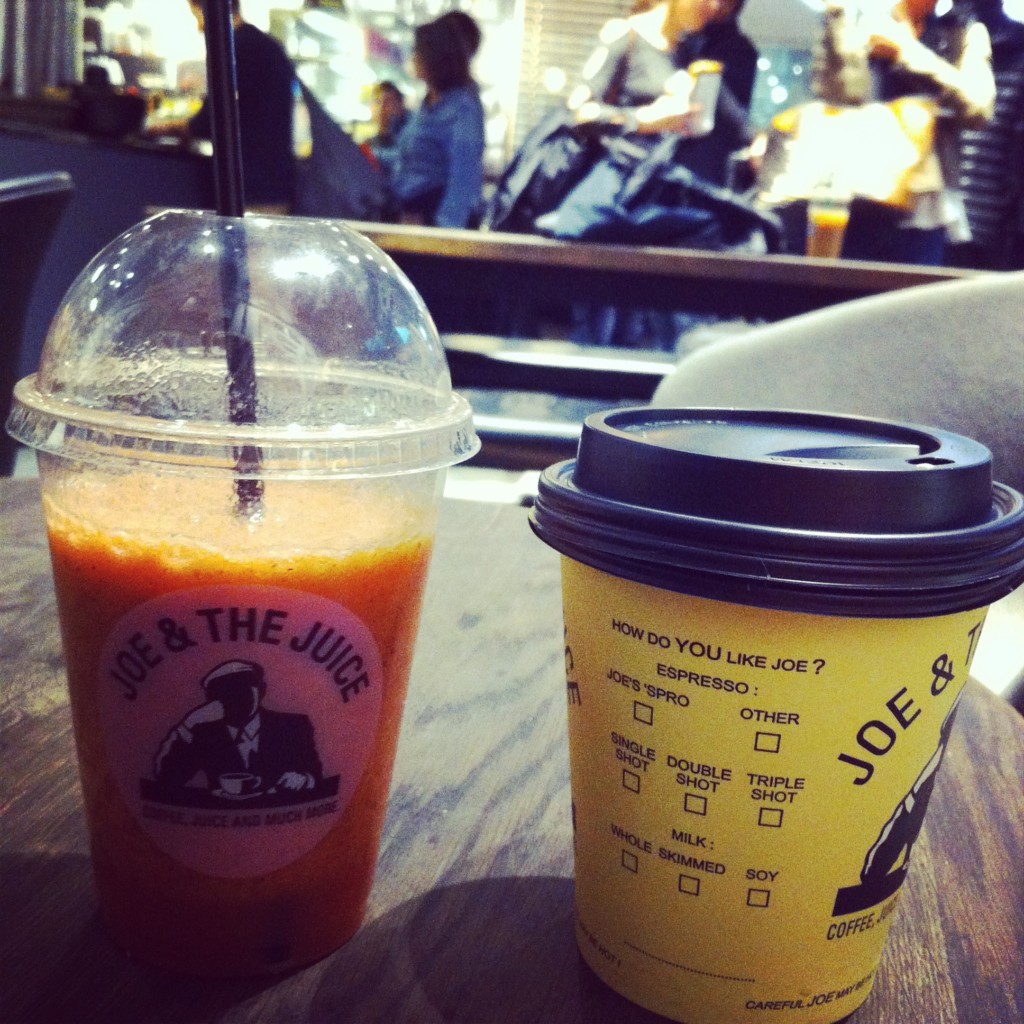 This is Les Tuileries, an amazing garden that is so beautiful. So so pretty (and it can get very warm there during summer time so be careful going there in July unless u wanna get really warm =)) 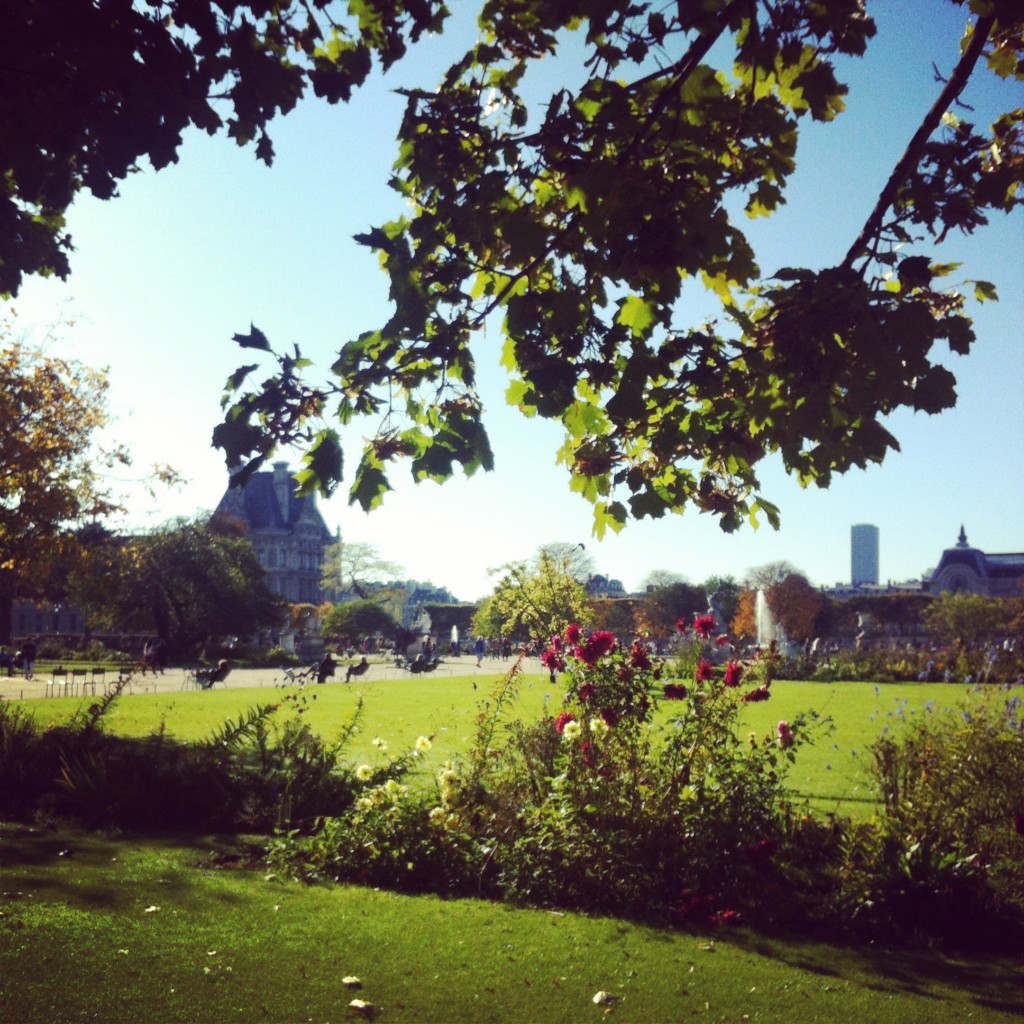 We had dessert for dinner at a random but cute restaurant.. The French people are really experts at making really delicious pastries.. pastries are like everywhere u go…it´s really dangerous if u want to keep ur weight=))) 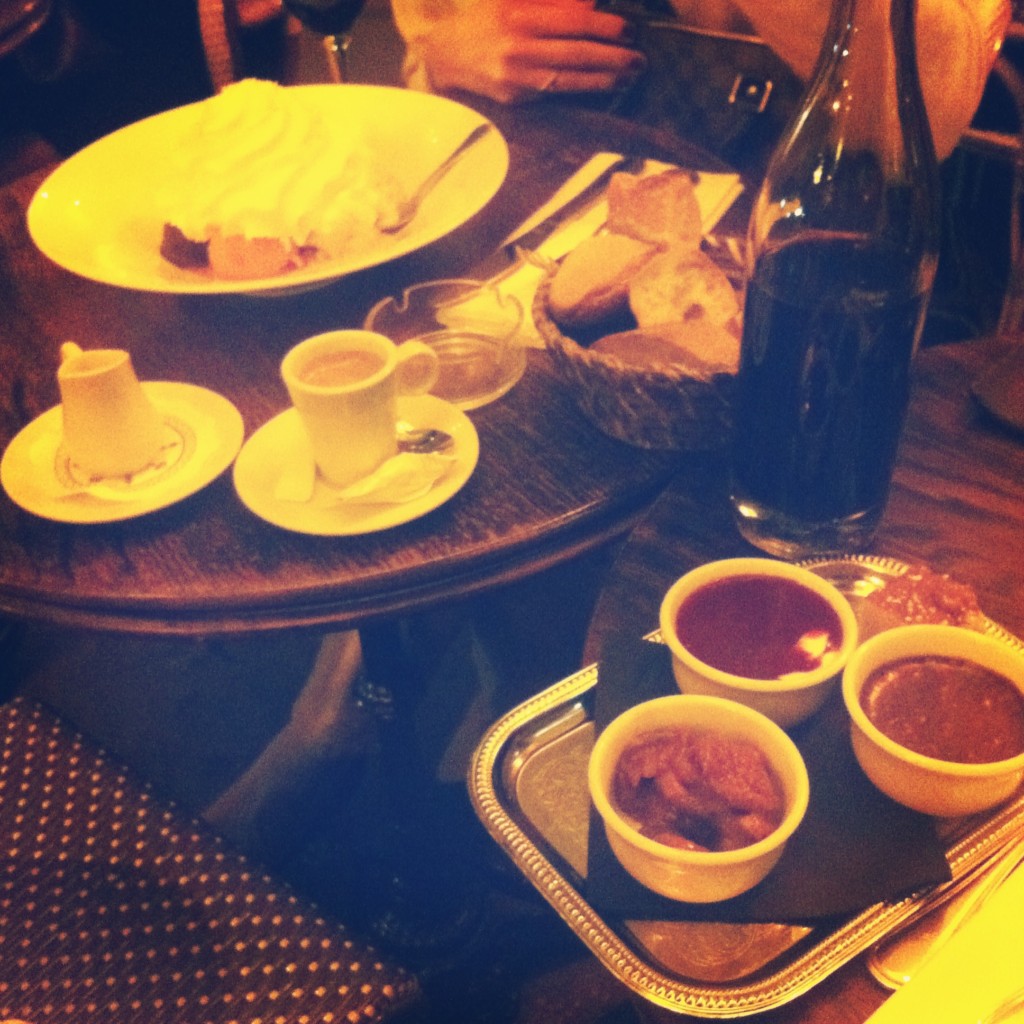 Breakfasts at French cafés are not the healthiest but they can be true delicious. I mean croissants and pain au chocolate? It just waters in my mouth just by thinking about them….But if u only eat to once in a while u should be fine.. 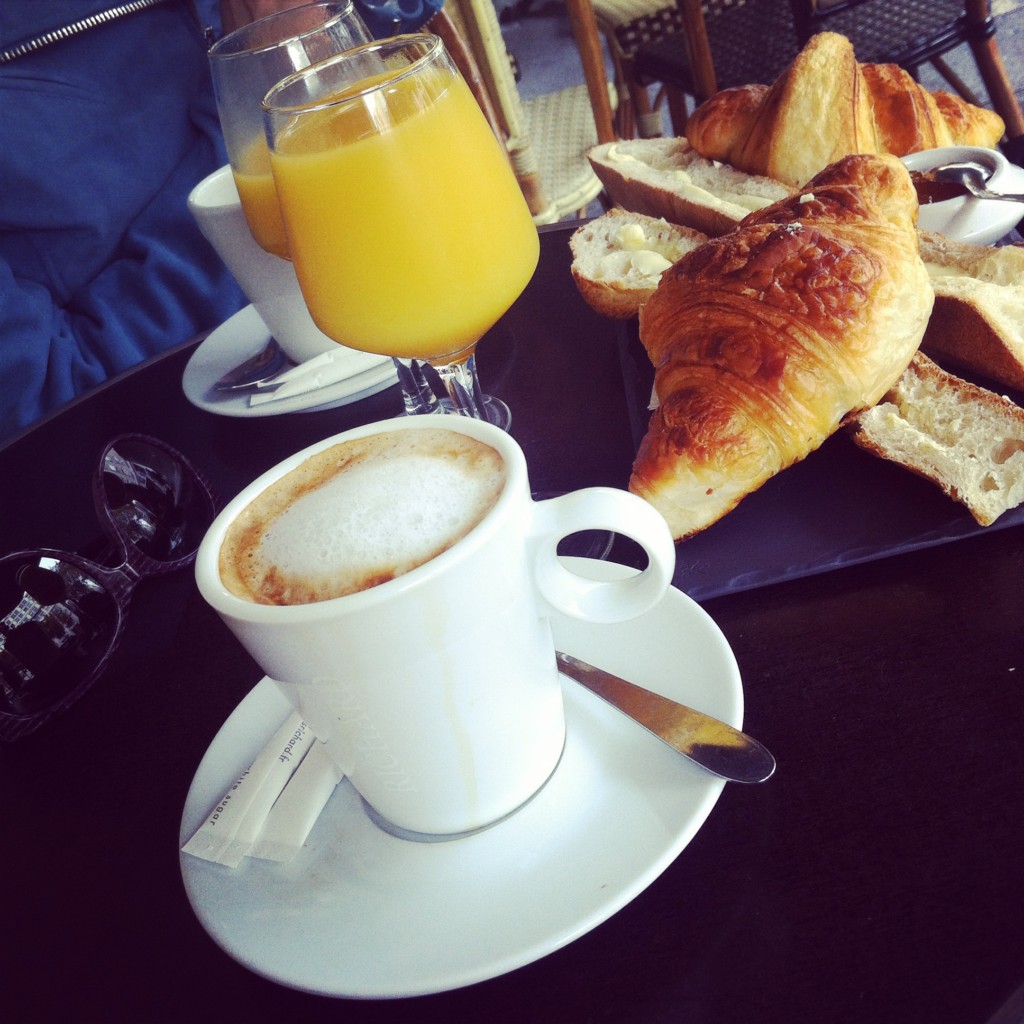 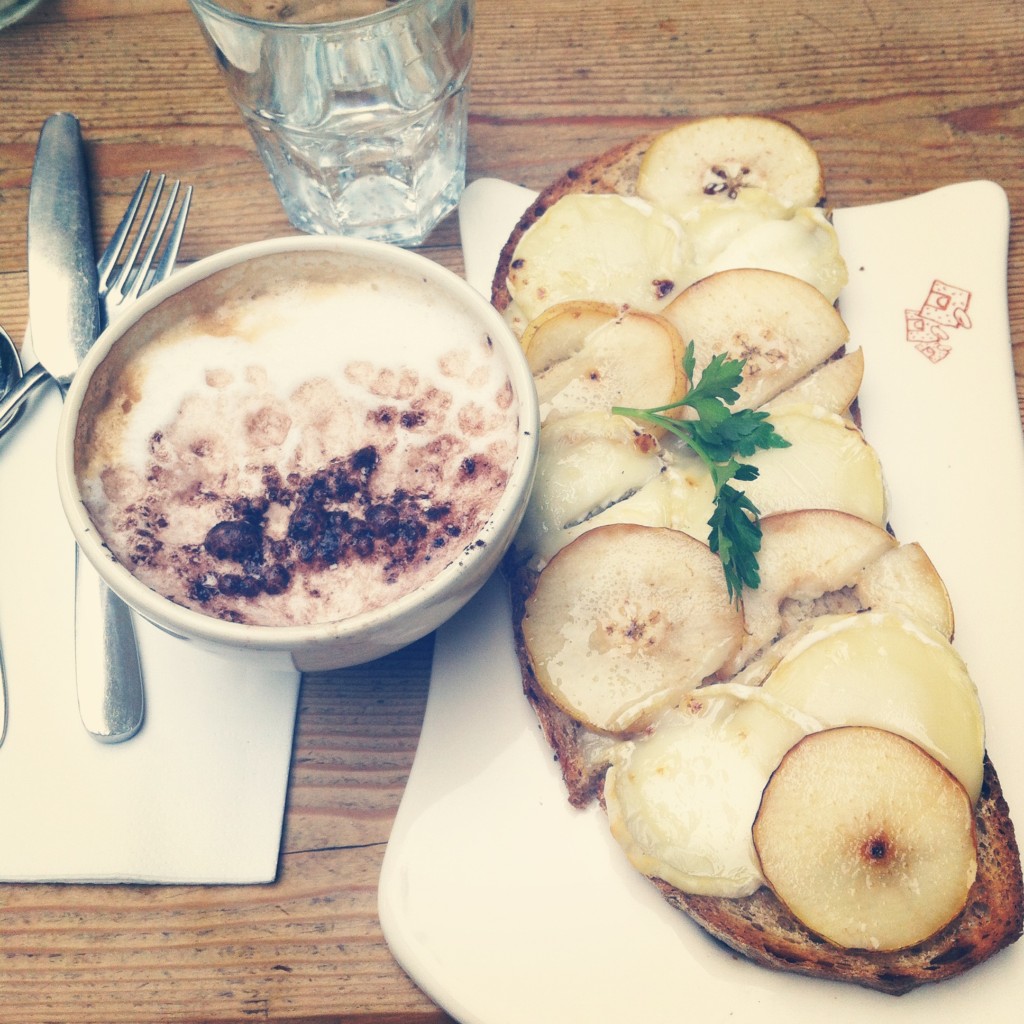 Wish u all a beautiful day!